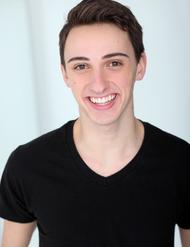 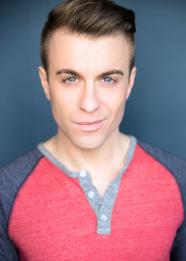 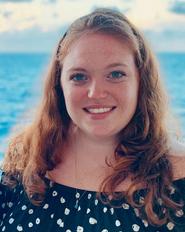 Denis Michael Rudisch is New York City based actor, singer, director, educator and voice coach. He received his Bachelor of Arts and his Master of Arts in Musical Theatre Performance from the University of Music and Performing Arts Munich/Bavarian Theatre Academy and holds a Master of Music degree in Vocal Performance with a concentration in Music Theater from NYU Steinhardt as well as a post-graduate Advanced Certificate in Vocal Pedagogy with a focus in Vocology and Voice habilitation/rehabilitation (Singing Voice Specialist) for the performing voice. He is a member of the National Association of Teachers of Singing, the Pan American Vocology Association, the New York Singing Teachers’ Association and the Voice Foundation. Denis performed in more than 35 professional theater productions in Europe and also worked as a voice coach, music director, pianist, and vocal supervisor for many renowned theaters in Germany. He was part of the German original cast for Avenue Q and Spring Awakening. Denis is currently working as an Intern Researcher for New York University – Langone Medical Center/NYU Voice Center in Dr. Aaron Johnson’s Voice Exercise, Science and Aging Laboratory. He is also teaching a Vocal Pedagogy tutorial for the University of Applied Sciences Osnabruck (Institute of Music). Denis was on faculty with the University of Music and Performing Arts Munich/Bavarian Theatre Academy for more than 6 years and work as an adjunct instructor voice at New York University for 2 years. In addition to performing and working as an educator, Denis maintains a private voice studio in New York City and a virtual international voice studio. He enjoys preparing his students for auditions for Broadway, Off-Broadway shows, national tours, and regional productions. Denis is specialized in voice habilitation for the professional singer and coaches many performers in New York City, Los Angeles, Berlin, Munich and London.

A former child actress herself and the mother of two dramatic boys,  Amy Emke enjoys sharing her love of theatre with children and has been teaching theatre programs to them for the last fourteen years.   In addition to her classes for Spotlight Arts,  Amy also teaches  after-school musical theatre programs for the Pawling Central and Carmel School Districts through Camp Herrlich, where she also serves as Summer Day Camp Director.  Amy has taught music and drama programs for Kids Up Front, The Sunshine School, the Quaker Hill Country Club, “Shakespeare at the Castle” in Millbrook, NY., and Theatreworks New Milford in New Milford, CT.   A graduate in theatre from the Baltimore School for the Arts, Amy also studied at the Experimental Theatre Wing of New York University’s Tisch School of the Arts.  Amy is a member of Hawk Rock Theater at Arts on the Lake in Lake Carmel, and has directed productions for Trinity Players in Poughkeepsie and for Pawling Public Radio.  Amy’s goal as a teacher is to help children develop a life-long love of theatre as a means for creative self-expression.

Tara Micale received a BFA in music education at The University of Hartford’s The Hartt School of Music (Class of 2020), and she’s an aspiring singer-songwriter and recently competed in the sixth season of New York’s Got Talent where she came in second place. Tara was the music director in Hartford’s chapter of Sigma Alpha Iota and directed their first live album concert, featuring songs from Sara Bareilles’ “Waitress.” She was the assistant music director of her collegiate level a cappella group, HartAttack, where she has arranged and soloed numerous works. Tara can also be found running music classes for little ones at local libraries (Sing Along with Miss Tara). 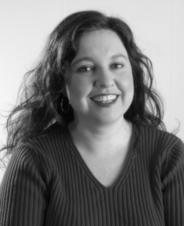 Eric is a New York City based Director, Choreographer, and Theatrical Professional, and a proud graduate of the prestigious Marymount Manhattan College Theatre Arts program. Most recently he was the Assistant Director to Emmy nominated Director/ Choreographer, Al Blackstone, on ANNIE starring Andrea McArdle. Additionally, Eric was the Staging Assistant to two-time Emmy winner and five-time Tony nominee Patricia Birch on the new musical SWEETEE, Off-Broadway at the Signature Theatre; served as the Assistant Director/ Choreographer to Ryan Kasprzak on ONCE UPON A MATTRESS at the York Theatre; and was a Choreography Assistant for Theatre Arts Center NY. Eric is a proud leader of the Mainstage program at Spotlight Arts, where he has received two National Youth Arts nominations for his Direction and Choreography, as well as guiding his students to receive a total of 21 National Youth Arts awards and nominations.

Lex is elated to be joining Spotlight Arts! Lex is a New York City based director, actor, creator and educator with a BFA from Sam Houston State University.  Growing up internationally, Lex was exposed to varying degrees of art which he showcases in his productions.  From Africa, to the Middle East, he has dabbled with many forms of theatre making.  In the summer of 2014 he worked closely with the American Consulate in Cairo, Egypt to teach english through theatrical techniques. He was honored by the Kennedy Center Theatre Festival for his meritorious direction for The Storytelling Ability of A Boy, which earned an invitation to perform select scenes at the state festival.  Getting his start in the Southeast market, Lex has contributed on Regional and World premieres in the Houston area, as well as helped shape new workshop plays at the Arkansas New Play festival; where he assisted on new works by Qui Nguyen (Reya and The Last Dragon, She Kills Monsters) and Tony Nominee Lee Blessing (Eleemosynary). In addition, Lex was the resident acting teacher for Inspiration Stage in Sugar Land, TX where he directed their main stage and youth shows. In New York, Lex has directed new plays that have premiered at the American Theatre of Actors and the John DeSotelle theatre. Currently he is working on a World Premiere new musical that focuses on climate change and how we can do our part to save the planet we live on. 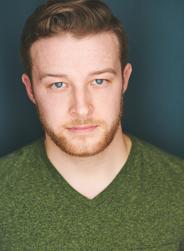 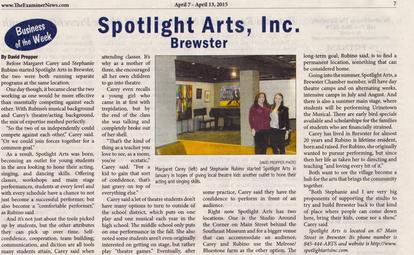 Sarah is a graduate of Purchase College. She freelances and assists in direction, musical direction, stage management, and costume design. Sarah was nominated for a Metropolitan High School Theater Award in 2016 for her work as student director in Brewster High School’s production of Hello, Dolly! She has worked with many children’s theaters, community theaters, and schools in the tri-county area. As an actor, Sarah has had the pleasure of working with many different community theaters. Some of her favorite roles include Tracy Turnblad in Hairspray, and Rona Lisa Peretti in 25th Annual Putnam County Spelling Bee. She won a National Youth Theater Award in 2016 for Leading Actress in a Musical for her role as Hope Cladwell in Spotlight Art’s first Mainstage, Urinetown. 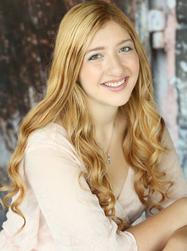 Stephanie (Rubino) Scuderi is the founder of Spotlight Arts Inc. and is a freelance director, voice teacher, actor, and educator. Stephanie is currently on the musical theatre faculty of Temple University's Boyer College of Music and Dance, where she teaches voice lessons and master classes to their BFA Musical Theatre program. Stephanie holds four degrees: a Master of Music in Vocal Performance: Music Theatre from New York University Steinhardt (ranked the #1 graduate musical theatre program in the nation), a Bachelor's degree in Theatre Performance and Theater Management from the University of Miami, a postmaster's Advanced Certificate in Vocal Pedagogy from NYU Steinhardt, and a Certificate of Distinction in Vocal Pedagogy from the Boston Conservatory at Berklee as well. Stephanie is a member of the National Association of Teachers of Singing and is also a member of the Pan American Vocology Association. In addition to her own private voice studio, Stephanie has a decade of experience in directing, producing, teaching, and theatre management in both NY & FL, and for the past two years, Stephanie has taught private voice lessons as an adjunct instructor at New York University. Stephanie has taught and directed many master classes, productions and workshops at performing arts schools, public schools, children’s theaters, and nonprofit theaters & organizations all over the tri-state area. Additionally, Stephanie spent seven years as the theatre department director for Brewster Central School District in Brewster, NY.

Stephanie is the Executive Director of Spotlight Arts. She produces all programs, teaches private voice and acting, and additionally provides direction and musical direction for our mainstage productions and musical theatre workshops. 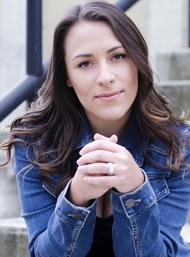