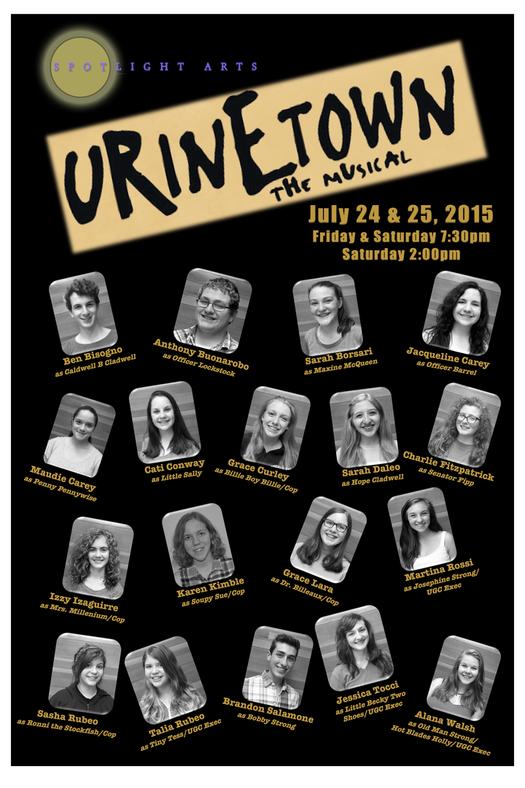 URINETOWN was produced on Broadway in September, 2001 by the Araca Group and Dodger Theatricals in association with TheaterDreams, Inc.,
and Lauren Mitchell 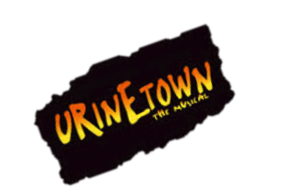 Water is scarce, but corruption flows freely in Spotlight Arts Inc.’s musical comedy production of “Urinetown,” July 24 & 25th. With the most awful title ever in musical theater history, this funny, innovative, big-hearted musical will leave you cheering and humming the tunes. In an attempt to regulate water consumption, Urinetown (a mythical, bad place) has outlawed the use of private toilets.

Nothing is safe from the savage wit of Urinetown: The Musical -- not Capitalism, not greed, not even (gasp!) Broadway. When a water shortage leads to a ban on private toilets, a greedy company charges admission for one of humanity’s most basic needs...until a hero decides he’s had enough. While its premise is already outrageous and witty, Urinetown ups both the irreverence and comedy with a score of Broadway song parodies every bit as sharp -- or sharper -- than the original numbers.

“On a serious note, Urinetown has a unique way of teaching students about environmental awareness as well as playfully exploring a political argument from both sides, “explains Margaret Carey, producer. “The actors and the audience can compare this imaginary world to our own world and think about how to address its depleting resources.”

Inspired by the works of Bertolt Brecht and Kurt Weill, Urinetown is an irreverently humorous satire in which no one is safe from scrutiny. Praised for reinvigorating the very notion of what a musical could be, Urinetown catapults the “comedic romp” into the new millennium with its outrageous perspective, wickedly modern wit, and sustained ability to produce gales of unbridled laughter.

Under the direction of Stephanie Rubino, the cast of 19 area teens will perform “Urinetown the Musical” Bluestone Farm & Living Arts Center (formerly the Melrose School) on July 24 & 25 at 7:30 with a special matinee performance on July 25 at 2pm.

Announcing the Cast of  "Urinetown the Musical"

Spotlight Arts is proud to announce the cast of “Urinetown: the Musical.” Yes, that’s really the title of the musical and no, we can not change it. But believe it or not, it ran on Broadway for over 965 performances and won three Tony Awards!

“Urinetown: The Musical” is an uproariously funny and earnest tale of love, greed and revolution in a time when water is worth its weight in gold. Twenty years of a disastrous drought have led to draconian water restrictions. Citizens are forced to use public, pay-per-use facilities operated by Urine Good Company. But what happens if the people rebel? Find out in this outrageously hilarious show!

Inspired by the works of Bertolt Brecht and Kurt Weill, “Urinetown” is an irreverent satire in which no one is safe from scrutiny, a comedic romp with wickedly modern wit.

URINETOWN was produced on Broadway in September, 2001 by the Araca Group and Dodger Theatricals in association with TheaterDreams, Inc. and Lauren Mitchell. URINETOWN The Musical Is presented through special arrangement with Music Theatre International (MTI). All authorized performance materials are also supplied by MTI. 421 West 54th Street, New York, NY 10019 Phone: 212-541-4684 Fax: 212-397-4684www.MTIShows.com

Spotlight Arts Inc. brings this riotously funny production to the Bluestone Farm & Living Arts Center on July 24 & 25 at 7:30 with a special matinee performance on July 25 at 2pm. Online tickets can be purchased at www.SpotlightArtsInc.com.

About "Urinetown the Musical"

In a Gotham-like city, a terrible water shortage, caused by a 20-year drought, has led to a government-enforced ban on private toilets. The citizens must use public amenities, regulated by a single malevolent company that profits by charging admission for one of humanity's most basic needs. Amid the people, a hero decides he's had enough, and plans a revolution to lead them all to freedom!

Join us in our first main stage production of 2015! This mainstage program is by audition only and is a larger scale commercial production that offers professional direction to the young musical theatre performer at an intensive rehearsal pace. The mainstage cast is made up of lead and ensemble roles. Actors in the ensemble sing and dance as part of a group but do not always have individual lines or solos. The cast meets for rehearsal 3 times a week and rehearses every day during tech/show week. This program requires a high commitment and only 1 absence is allowed.

Thank you to all who auditioned for our Summer Mainstage production of URINETOWN The Musical! Please view the cast list and rehearsal schedule. Students in the cast must accept their role by registering online before June 1st. Our first rehearsal will take place at the Studio Around the Corner on Thursday, June 4th from 7-9pm. Don't see your name on the cast list? You may be on our waiting list! Stay tuned for announcements.